From Poké to Digi 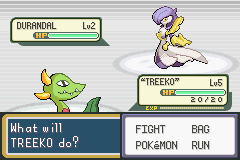 I had a dream last night that I was testing a Pokémon GBA ROM hack where normal Pokémon evolve into so-called “Digimon”. They also go through 4-6 branching stages of evolution rather than the typical maximum of three. Because it was in early beta, most of the Pokémon and “Digimon” were missing. This was represented by a green block/microchip with a yellow question mark inside it. I had a Treeko which eventually evolved into a creature with leaves for limbs, a pair of thorns behind its head, and a heart shape on its tummy.

I explored the game world not in a third-person view like every mainline Pokémon Game ever, but in first person. I remember wandering around a hospital, which looked it something right out of a Gameboy Camera.

In the hospital, I encountered a level 2 lavender Gardevior with yellow armour-like growths on its left arm. I recall the growths to resemble the forearms of the legendary Pokémon Palkia, or at least a certain brand of potato chips.