It all started when I found a comic on Danbooru. But it wasn't a short one or a page for a doujinshi manga, but the kind of comic you would find on the internet that's technically a really long image.

I could tell by the artstyle that it was made by a Neopets user who was known for their contributions to the Neopian Times' comics section. It looked like a rough sketch for an epic fantasy saga aimed at both weebs and furries.

The comic begins with a foreword from its creator. It was supposed to explain what the story's about, however the writing was very sloppy and difficult to read. However, I managed to read a couple words so I had a better idea on what's going on. She even drew a small cartoon of herself besides her signature! Nice!

The comic had a panel that was supposed to tell the reader that a "crossover character" would appear in the comic. That character is a brown mammal, who looks like a lot like a brown Xweetok. I think her name was Anai-Bee or something. It was supposed to be a very African-sounding name. At least the 'bee' part was the one I remember in vivid detail. 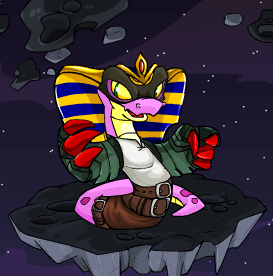 We then see a pink, buff cobra man wearing a muscle shirt in the middle of a black void. He reminiscences about having his butt kicked by a Zafara and a Bruce, and vows to impress his father in any way he can.

He manages to enter a portal to another dimension, which was when the comic transitioned into the kind of film one would watch with a Virtual Reality headset. He ends up on the sidewalk in the middle of a forest. Despite the hyperrealistic environment he ends up in, he does not become 3D; instead he transitions from a rough sketch to a well-done cartoon drawing in full colour.

A young blonde human girl in a gray dress shows up to greet him. After a bit of conversation with her, the cobra man force chokes her as a display of dominance. He then proceeds to explore the forest on his own.

It cuts to a first-person view of me in the middle of a different forest, which took place in an MMORPG. I could tell it was a starting place for new players, because it was covered in mostly green, translucent slugs the size of an average human being and always stood upright like their Pokemon equivalents.

I decided to practive archery by shooting small, yellow javelins of light at trees when I accidently fired one on a banana-like slug larger than an elephant. Because of its enormous size, I could tell it was stronger than the rest of the area.

It chased after me throughout the forest when I found a cabin with an open door. I entered it see a friendly white-haired girl greeting us at the entrance. Dream logic told me it was a hub for players of all walks of life. The people in the cabin, including me, looked at the door in horror as the giant slug tried to get inside...