I visited two webpages: one from an imageboard and another from a site full of warm colours. 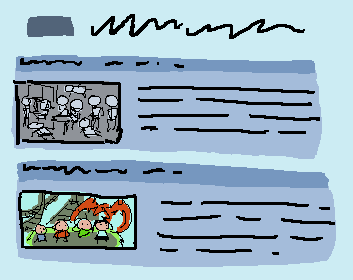 On the imageboard, there were two images I remember the most clearly.

The first was a gray room full of anime schoolgirls. Some of them were wearing differently-coloured skirts. Each one was doing a different thing: one was sitting at her desk, reading a book. Another one appears to be using a desktop computer. The third one is simply standing there, and so on. The more you look at the image, the more schoolgirls you notice.

The second image was presumably fanart of some kind. "Ragna," said the Rathalos from the Monster Hunter series. "The world needs you once more." But little did he know is that Ragna had retired from being a savior of the world to become a father. He replied to the red wyvern, "Can't you see I'm on a roller coaster ride with my family right now?"

I visited a website with warm colours. The background was a crimson red, and the website header is a picture of a silhouette of a strong, humanlike bug standing behind the yellow rising sun.

The page I visited contains a header and a block of paragraph text followed by a storyboard.

The storyboard/animatic bore the same colours as the website itself. We first see a large person being surounded by a crowd with pitchforks and torches. In the next shot, we see a cross covered in wax zooming towards the camera.

The third shot shows the large person throwing a punch at a camera, and on the fourth we see another person getting thrown and bounced off the floor.

The very last thing I remember was being chased and knocked down in my living room while being covered in a large, cozy blue blanket... by a child in a bee costume!? I understand that not all events are connected during a dream, but what does it have to do with me taking a good look on various images on the web?