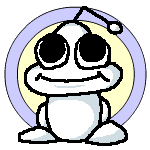 I had a dream about a Newgrounds flash animation. It was just a bunch of hills on a sunny day. A small character, resembling the mascot of Reddit, showed up on top of the navigation bar. "Hi!" he said, looking at the audience. "I'm Gibs! Watch me jump!" He then proceeded to jump off the navigation bar, and slowly fell, still smiling. By the time he landed, he burst into gore. Stylized, cartoony blood splattered everywhere. Gib's eyeball and intestine landed on the camera, as laughter can be heard from off-screen.

Which begs the question: Why did he do it? Was he secretly depressed the whole time, or did he just realize that he's actually living in a fictional world? And most importantly: why is his grisly death supposed to be funny?