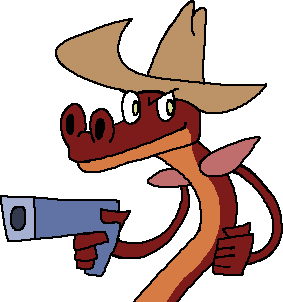 Meet Flemy. He is a snake who happens to be a gun-toting cowboy with the power of fire. Despite being a snake, he resembles more of a crocodile due to his snout and a pair of arms, which snakes do not normally have. But out of all of the possible names, why 'Flemy?' Why not 'Pepper Jack', 'Heatwave' or even 'Crikey'?

Well, let me tell you: it was not actually my choice, but instead someone else's. You see, I met this guy in a men's bar in the middle of a Sears store, and he happened to be the creator of this character.

He also had a drawing book that eerily resembles my real-life dream book, where he would draw his own original characters for the Sonic series. Among them is a skunk woman clad in purple. Her name wasn't mentioned in the dream, but if I had to guess, then it would be something like "Smelle" or "Skonq".

I'm not sure if he's an official writer for the Sonic team or just some Deviantart fanboy who enjoys expanding the Sonic fanon universe. I wonder if his characters had the same naming conventions as Flemy himself...