The Origin of Corona Vera 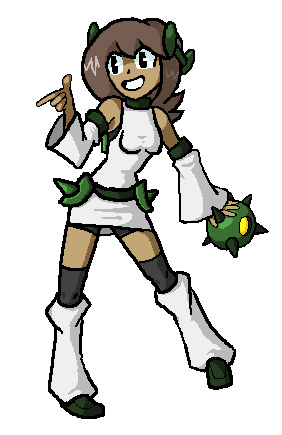 One of my original characters, Corona Vera (now simply named "Vera"), first appeared in a dream I had a couple years ago, which I think took place during my last months in high school. However, she was called "White Cactus" because she wore a white dress and possesses the power to throw cacti at people. :P

In that dream, she was fighting against her rival, Red Lightning (who was basically a cheap Red Flash knock-off back then) when some guy showed up with tickets. "Hey guys, I got tickets to a cool play place!" he raised his voice. This simply made them stop fighting, and so they went to this "cool play place" some random dude was talking about.

It turned out this "play place" was actually an indoor playground that was so huge, that it had to be divided into separate "worlds". Each world has their own theme (Kid's World, Swamp World, Sea World, City World, Viking World, War World, Gensyoko, HAL's Fortress, etc.) and there were even one which was basically a giant itallian plumber you need to to inside before you enter HAL's Fortress. This Fortress is the most hardest World out of all of the Worlds, simply because of its challenging puzzles.

So anyways, White Cactus and Red Lightning met up with various characters, such as Hound Dog (from Cosmic Break) and a chubby dwarf viking woman. They explored around the indoor playground, but they got separated into different worlds, especially Cactus. That was when I began to see the dream in her point of view: she was sliding across the inflatable pink tunnels, trying to get from World to World, as she glimpsed at the ball pits on the tunnel's several exits. (The ball pits were basically EVERYWHERE in that indoor playground. No matter where you went, you could not escape from the presence of ball pits!!) She even managed to slide all the way inside Mario's Body and visited HAL's Fortress!

Cactus slid all the way through her final destination: a giant underground boss arena with bodies scattered around the place. This certainly was the lair of a powerful machine: Mobile Fortress Guiltred, a Cosmic Break Boss! Cactus managed to defeat him by throwing a cactus at his feet, which trips him over. Cactus power baby!

After the dream ended, I focused on White Cactus' character development and she became Corona Vera. The rest is history.